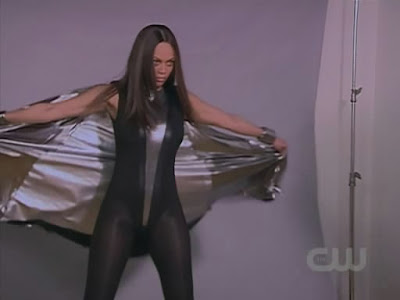 Make no mistake, America’s Next Top Model is all about Tyra Banks and the goofy-ass bit of theater she’s been pulling with her co-hosts/conspirators for the last five cycles or so; the contestants and their trials and tribulations are just background noise.

The show, which purports to shoot ordinary girls with a dream into the stratosphere of the modeling world, shifted focus from those “in the running to be America’s Next Top Model” to the skits Tyra & Company do to fill the time between photo shoots, judging, and house drama at around cycle eight or nine. It was then that the participants became less like aspiring models and more like fans of the show and members of the Cult of Tyra who wanted their 15 minutes of fame.

Accordingly, the producers became determined not to let the real stars of the show–Tyra, Ms. Jay, Nigel, the other Jay, and whichever washed-up ex-supermodel they happened to lure onto the judging panel for that cycle–get upstaged by the houseful of fame whores.

The result is a gifted bit of lunacy, manic street theater in the low-culture realm of reality television. The last several cycles have given us Super Smize, a superhero character played by Tyra who teaches the contestants how to “smile with your eyes”; ambiguous words of wisdom such as “look like a cheetah with a secret”; and photo shoot director Jay Manuel dressed like a vampire.

All of this begs the question: Has Tyra Banks lost her mind?

Or is she a genius, streets ahead of everyone else in the business?  Since I am a fan of her work (her turn in Halloween: Resurrection was sublime), I tend to think the latter.

She’s part of the new school of pop persona, along with Lady Gaga, characterized by outlandish behavior tempered with a sense of self-awareness. Both Gaga and Tyra know that their acts are ludicrous, like the backstories and drama that “enrich” the world of WWE wrestling, known as kayfabe.

The kayfabe of the WWE, along with its equivalents in music and reality TV (Gaga’s act and Tyra’s  ANTM), is modern Greek theater. All three present a heightened, pop-saturated version of reality, and wrap us up in the trashy grandeur of it all.

One admirer of kayfabe was Andy Kaufman, one of the original post-modern  celebrities, who called himself a “song-and-dance  man.” When Tyra Banks dons her Super Smize get-up, she’s dancing to his tune.